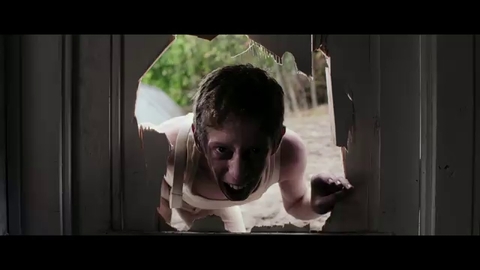 It’s coming for you, it won’t stop and there’s nowhere to run.

Back in the 1990s, when my wife and I were newlyweds and moving around a lot, we came up with this idea where a moving company would drop off a trailer at your home, you’d fill the trailer, and the company would come haul it to your new home and drop it off for you to unload. Imagine our surprise when, years later, we saw the first commercial for Pods. A simple idea, to be sure, but someone had figured out a manageable way to make our proposal work. It wasn’t the cure for cancer or putting a man on Mars, but it was elegant in its own way and the kind of thing many people would find useful.

That’s what I thought about as I watched It Follows. The premise of the film is pretty basic: A cursed person is followed by a shape-shifting monster visible only to themselves, and the only way to get rid of the curse is to pass it on, via sexual intercourse, to another person. A supernatural STD if you will.

I wonder how no one thought of this before. Much of horror, or at least American horror, is based around the idea that indulgence in vices leads to horrible repercussions, a sort of negative karma effect that comes down largely on teens. Writer-director David Robert Mitchell didn’t develop some mind-blowing premise on which to base his movie, such as we’ve seen in films like Cube, Pan’s Labyrinth or A Cabin in the Woods. He really just shaved all of the extras off of pretty much every horror flick you’ve ever seen and got down to the nut of it: Sex kills.

To his credit, that’s not all he did. His assembled cast is terrific. Maika Monroe plays Jay, the poor girl who has sex with her new boyfriend only to find out that she’s now being hunted by a monster with murderous intent. Her sister and friends – played by Lilli Sepe, Oliva Luccardi and Keir Gilchrist – are a tight, quirky unit who rally behind Jay while initially not being so sure that she is of sound mind. And the actors chosen to represent the “It” are all creepy and disconcerting in their own ways.

But for me, what really seals the deal is the score. Not since the original Halloween have I watched a movie where the music was so directly and surely woven into the story. It starts very quietly, slowly becoming more unsettling as it builds. The fact that Mitchell chooses to minimize the sounds and general aural distractions throughout It Follows results in the music having that much more of an impact when it does kick in. Brilliantly done all around.