5 reasons why 30 some years was worth the wait

Big scary dudes? Check. Crazy weapons? Check. Using what appears to be someone else’s skin as a mask? Check. Welcome to the Max-pocalypse.

1. A new Max for a new era. Mel Gibson is one of those guys, like Tom Cruise or Will Smith, who sort of screams “movie star” no matter what role he is inhabiting. That’s not necessarily a bad thing, but it is what it is. In Road Warrior and Thunderdome in particular, you never get the feeling Max is in all that much trouble, at least not enough trouble that he can’t get himself out of it with his dope hairstyle intact, whether or not his allies survive. In Fury Road, we get a full on PTSD- and depression-ridden Max who seems as if he might do himself in before any of the wacked out psychopaths in his post-apocalyptic world ever get the chance. Tom Hardy has a vulnerability Gibson lacked – particularly after the original Mad Max – and it plays well within the story. Hardy’s Max is damaged goods, unreliable, unstable, unpredictable. As he should be. 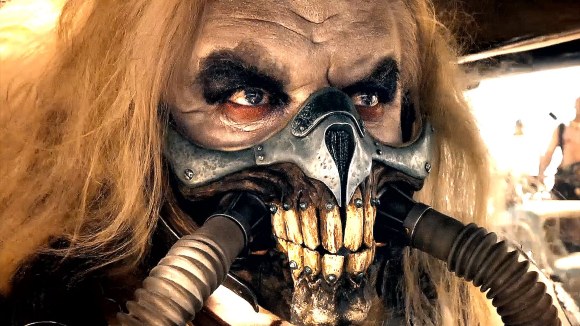 Imortan Joe is not a fella who takes being betrayed lightly.

2. A worthy opponent. With very little in the way of character development, Fury Road gets a heckuva lot of villain out of Imortan Joe. He controls the water, and with his allies, the ammo and fuel as well. He has two sons, one a shrunken, mutated man who is wheelchair bound, the other a hulking brute of minimal intelligence. Imortan knows neither has what it takes to rule his empire when he’s gone, so he’s desperate for a non-mutant heir. Yes, Imortan is very much a power-hungry cult figure eager to cement his mortality. But he also wants offspring who more closely resemble him, his abilities, just a dad who wants a son he has something in common with, like pretty much every dad on the planet. There is some genuine grief when he loses his child, as well as an immediate thirst for vengeance. In a movie where every villain is an over-the-top comic-book character – including ol’ Imortan Joe himself – that desire for a “normal” child helps round out what might otherwise be a flat character.

Let’s hear it for the girls.

3. Grrrl power. Imperator Furiosa (Charlize Theron) is every bit Max’s equal, possibly even his superior, considering she’s not operating from a place of fear, delusion and shock. The other women of Fury Road, whether they be from Imortan Joe’s harem – the young ladies pictured above – or the rebels from the “green place,” all play key roles. This isn’t a “save the damsel” flick in any traditional sense, and a whole lotta those damsels don’t make it. The fact that the women are part of the chaos and conflict and not just scenery or objects to be protected from harm makes them, and the film, far more interesting than what most American action flicks offer with regards to their leading ladies. 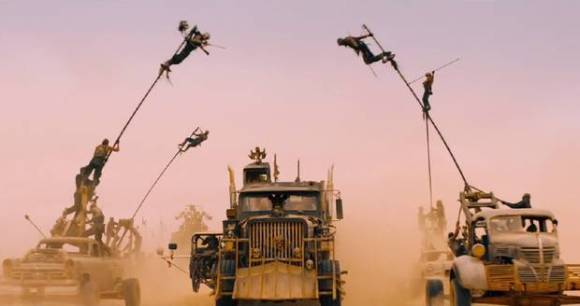 As you can see, there’s a whole lotta fury for just one little road.

4. Flying through the air with the greatest of ease. When possible, director George Miller eschewed CGI and went with the real deal. Lots of live stuntmen, lots of shit actually being blown up. It really cranks up the intensity in the action scenes, and there are very few “Whoa that looks fake” moments that plague other big-budget, FX-heavy films. I’ve always wondered why directors went fake when real was a possibility – although some of that probably has to do with safety/insurance concerns – and I suspect that Miller’s new gem will influence other directors to head in that direction in the future.

I can’t believe Gwar never thought of this..

5. That crazy guitar-shredding mofo. It’s a dude hung from rubber bands in front of a wall of amps while playing a guitar that shoots flames. Because Wagner blaring from approaching helicopters is so 1969. What’s not to love?