Don’t read this post about an awesome vampire movie

Just a girl out for a walk. Nothing to see here.

Wow. … OK, maybe that wasn’t emphatic enough. WOW! It’s not often I watch a movie, and I think, “I’ve never seen anything like this.” Sure, my teaser to this post drops a number of movie references, all of which seem justified. The pimp looks like he has purchased his living room decor from the Kohl’s Tony Montana collection. When The Girl is shown walking the dark, quiet streets of Bad City clad in her chador, she appears like Death from Ingmar Bergman’s Seventh Seal … or possibly Death from Bill and Ted’s Bogus Journey, which featured a Death that was, in turn, and homage to the Bergman classic. Girl has its own unique, dark humor, which made me think of Tim Burton, especially when The Girl herself (Sheila Vand) has the big, black, expressive eyes, narrow face and haunting paleness of a Beatlejuice/Edward Scissorhands-era Winona Ryder. And Arash, in his white t-shirt and jeans, driving his classic Ford coupe, is the Iranian image of James Dean from his signature role in Rebel Without a Cause.

But this film is so much more than the sum of its references. Writer/director Ana Lily Amirpour, who based the movie on her own graphic novel, has created a surreal parallel universe in Bad City, a bleak, lower-middle class city that is bordered by oil rigs that never stop pumping. Her characters adhere to archetypes making them familiar, yet each character is unique enough to stand on his or her own. Amirpour walks a constant tightrope, balancing between the stories she is trying to reference and the stories she is trying to tell. And she nails it.

Which brings me to Quentin Tarantino. That’s precisely what makes Tarantino compelling, his ability to re-invent genres using a mix of disparate references and his own perverse ingenuity to make something familiar yet not. So when Federale kicked in with Sarcophagus during A Girl Walks Home Alone at Night, while many reviewers thought “Spaghetti Western,” I thought of Tarantino’s similar references in Kill Bill rather than the old cowboy flicks themselves. The song was a seamless fit, an envisioning of a unique moment that managed to be grounded in similar movie moments decades before Girl was developed.

Tarantino’s gift has resulted in some amazing cinema over the decades. I can’t wait to see where Amirpour goes with her talent.

I love the soundtrack. Again, this is something that sets A Girl Who Walks Alone At Night apart. It’s not the latest pop music, or tunes that sound sort of like the latest pop music. It’s not a period piece weighed down by its over-played hits. It is a mix of genres and languages. The music supports and enhances the images and the emotion, never cloying, saturating the film to the point of over-doing it.

The cat. The fucking cat. Heh. 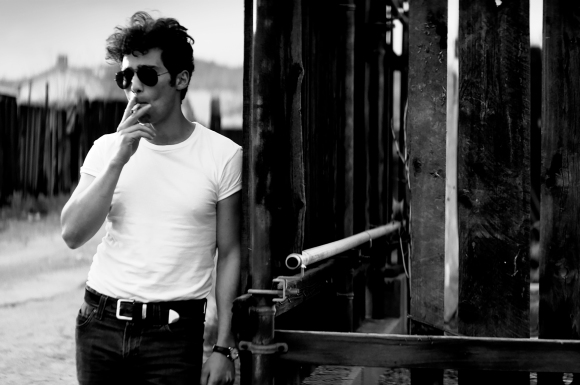 Arash is a rebel, and he’ll never, ever be any good.

Thematically, the quote this piece leads with says it all. The pimp needs for nothing, yet really wants for nothing, either. He goes and does his job every day, to the best of his ability, just like a banker or garbage man. He is joyless in his routine. The prostitute clearly has wanted for more, at one point, saving to achieve that goal. But the goal is now lost in the darkness, in the moments with ugly, violent men with their clutching and demanding. She is just a hamster on a wheel, saving and saving, but saving for nothing, saving for the sake of saving, because that is what she does, what she’s always done. Arash’s dad Hossein is a junkie, torn apart by the death of his wife. He exists simply to exist, because he doesn’t have the guts to move on with his life, and he doesn’t quite have what it takes to end it all. The Girl herself is the prime example of this, a creature that lives forever solely to feed. She has only her sad pop music and the never-ending hunger to occupy her infinity, no hope for anything else to break the endless monotony of her existence. Even the endless pumping of oil on the outskirts of Bad City is no longer about want, just black blood filling a thirsty, endless addiction.

This is what sets Arash apart from his fellow Bad City residents. He wants. He worked to buy the cherry classic car that he desired and now loves so dearly. He wants to be noticed by the rich girl whose yard he tends, wants to dance with her, kiss her, feel her. He wants to break out of Bad City, get beyond his pathetic life that is all he knows. He wants to know the Girl, who to him is a fleeting image of freedom, an enigmatic darkness from which springs hope for something new and exciting. His desire, his want is what drives the film and what makes him so appealing to the Girl and makes him such a sympathetic character to the audience.

And that, folks, is the long and the short of why you should give this awesome vampire film a chance. I hope you enjoy it is much as I did.