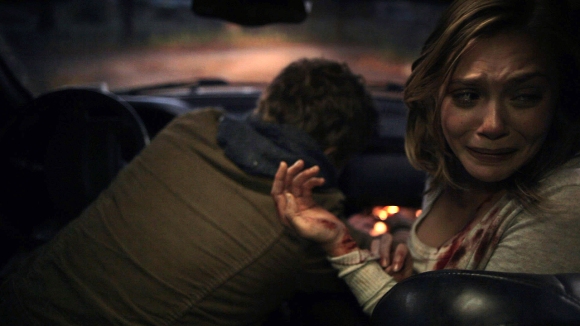 Elizabeth Olsen rawks as Sarah, a young woman stuck in the middle of a murderous night at a remote vacation house.

I’m a fan of the French horror flick High Tension from director Alejandre Aja (The Hills Have Eyes, Piranha 3D, Horns). “Tension” is the key word. Aja keeps it ratcheted up to the max once the home invasion begins, driving relentlessly toward one of the most over-the-top endings in horror. The film is a hoot and a half.

(Tons of spoilers ahead. You were warned.)

The problem? High Tension doesn’t make a goddamn bit of sense. The ending is great, a swirling mix of screams, blood, machinery and incredible intensity. But once the reveal hits in the ending – that our heroine, Marie, is really the madwoman behind all of this death and destruction – it’s easy to start replaying the film in your head and tearing apart the entire course of events. 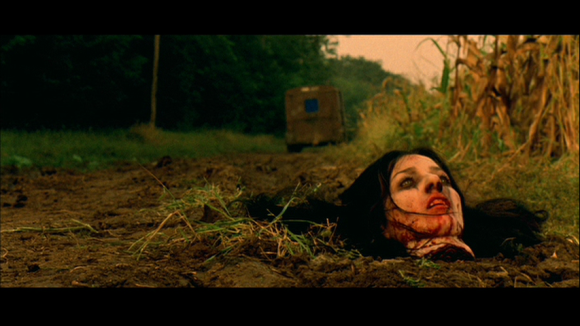 The key to surviving an attack by a “High Tension”-style maniac killer? Don’t lose your head, for starters.

To Aja’s credit, it really doesn’t hurt the film. High Tension is a nail-biter the whole way through, and he ends it quickly before you realize just how it unravels all that came before it. It’s the rare film that pulls the rug out from underneath you, and you don’t end up minding it. But that same quality also keeps it from being a great film, an elite horror classic, because it doesn’t survive multiple viewings unscathed. The visceral impact of High Tension only works on the first watch, and great films live up to repeated scrutiny.

Silent House doesn’t have quite the build-up High Tension does, but it delivers in the end. Sarah, a college-age young woman, is out in the sticks with her dad and uncle, fixing up the family summer place in an attempt to sell it. But all is not as it appears, and soon, Sarah is ducking, dodging and running for her life, trying to save herself – as well as her dad and uncle – from a merciless killer.

Like High Tension, we come to the realization that our heroine is our killer. Unlike High Tension, directors Chris Kentis and Laura Lau (who wrote the screenplay based on a Spanish film) drop subtle clues as to the identity of our killer and her motives in the lead up to the reveal and tightly control the action to make it believable. Also unlike High Tension, it makes sense in the end. There’s nothing that happens in the house that can’t be attributed to Sarah once we find out she’s dissociated/had a psychotic break and is out for revenge for the childhood molestation engineered by her father, aided by her weak uncle. There are no gaps, no impossibilities, no reaches. It’s a slick piece of film making, and another outstanding performance by star Elizabeth Olsen (see also Martha Marcy May Marlene, which should have seen Olsen nominated for an Academy Award), who shines as the camera follows her through the entire endeavor.

I’m looking forward to seeing this again, seeking more clues that the filmmakers carefully crafted into the film. I have a feeling Silent House will be just as rewarding the second time around.