‘Five Armies’ all of what was right, wrong with ‘Hobbit,’ ‘LOTR’ 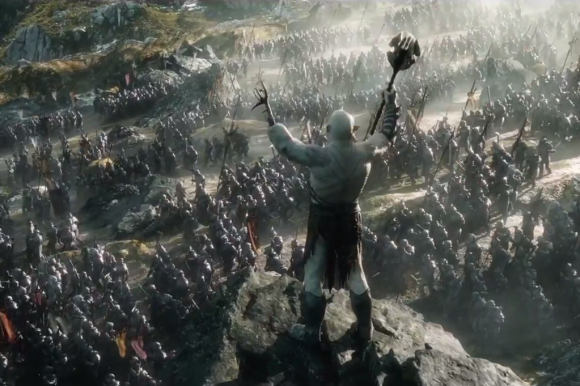 The battles of large armies will never look the same again after the ‘Lord of the Rings’ and ‘Hobbit’ movies.

The Hobbit: Battle of the Five Armies was satisfying and frustrating, a perfect wrap-up to an imperfect sextet.

The Lord of the Rings/Hobbit saga was a huge undertaking, the likes of which may only end up rivaled by James Cameron’s Avatar series. Peter Jackson and pals took what might be the most intricate, heavily studied classic geek literature in history and translated it faithfully and beautifully to the screen. I don’t think that accomplishment should be underestimated.

Jackson also re-defined how large-scale battles will be waged on-screen. From Helm’s Deep to the final clang of iron in Battle of the Five Armies, large swaths of troops clashing has never been done so intricately, so dynamically. Movie fans will benefit from that down the road in other films, as well.

The problem, however, is that “epic” sometimes just means “long.” And all six of those films suffer from bloat. Some of that is understandable, with Jackson hewing as close to the books as possible, trying to reward fans of the books. Some of it was just hubris, with the filmmakers knowing full well they could make those films as long as they wanted and just rake in the cash and awards.

But that shouldn’t undercut what Jackson accomplished here. I tip my hat, and look forward to what he offers up next.