‘Serpent of Venice’ not quite the splash ‘Fool’ was 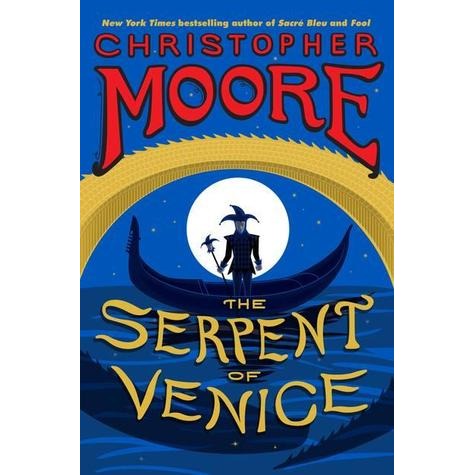 If I could use but two words to describe Christopher Moore’s Serpent of Venice, I would choose these: Dragon shagger.

Serpent of Venice – a mish-mash of William Shakespeare’s Merchant of Venice and Othello, with some of Edgar Allan Poe’s Cask of Amontillado tossed in, as well as cameos by Marco Polo and, yes, a dragon – marks the return of the titular fool Pocket from Moore’s Fool, itself a sendup of King Lear. Pocket is classic Shakespeare, loud mouthed and bawdy, a bastard runt with royal blood. Along with his even more obscene puppet, Jones, the monkey Jeff and Drool the moron, Pocket bribes, cajoles and fights his way through the powers that would doom both Othello and Shylock, committing heinous fuckery at every turn.

There’s a lot to like here. Moore is weaving a lot together, so the book rarely drags or is uninteresting. Pocket is still the star, even when he’s not, a ridiculous thorn in the side of Venice society. The dragon sub-plot provides some menace, and Othello and Shylock both come off a bit more believable than in Shakespeare’s works.

The problem? Not enough Pocket. He drives Fool, the ultimate antagonist plotting and pitting forces against each other for his own gain and for the pleasure of watching the fallout. In Serpent, Pocket is much more part of the ensemble. When he is in the midst of the action, the book is never funnier or more compelling. When he is not the center of what’s happening, Serpent loses its spark a bit.

That said, it’s worth the read. Moore has made a delightful, bawdy, laugh-out-loud mess of these classics. I’m sure Shakespeare would approve.