I need a hero 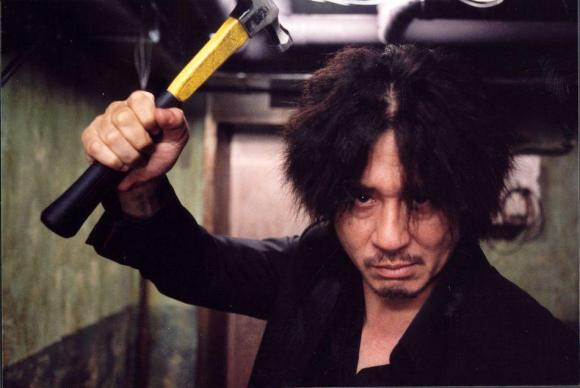 The face of a man truly wronged.

I recently had a conversation with a high school-aged acquaintance who hopes to someday write and produce anime. He has an idea he’s been working on, and he occasionally runs his schemes by me. The other day he asked this: What makes people identify with a hero? As the elder statesmen, I felt like I couldn’t just say, “Good question. That’s what every writer is trying to figure out.” Thinking quickly, I came up with this example.

In Con Air, decorated military veteran Cameron Poe (Cage) is unfairly jailed after defending his wife from a bunch of predatory hoods. Scene after scene, we are reminded of how much Poe loves his wife and daughter, who was born after he was sent to prison. Poe, when not trying to reign in a plane full of violent sociopaths or find his best diabetic bud some insulin, spends the bulk of the movie attempting to keep track of a teddy bear he has purchased to give his daughter upon his release.

Then there’s Oldboy. Our “hero,” Dae-su Oh, is a mess. Here’s a middle-aged man arrested for public drunkenness who handles his arrest with all the aplomb of a two-year-old who has had his favorite toy taken away. A friend bails him out, but Dae-su shows no gratitude. The friend abandons him in the street outside the police station. Then, with no warning, Dae-su disappears.

When we see Dae-su again, he is a prisoner in an odd hotel room. He has no idea where he is. The first thing he sees: A TV news report about the mysterious death of his wife and daughter, and the fact that he’s nowhere to be found. Dae-su is drowned in grief and rage, but has no outlet. In fact, for the next 15 years, Dae-su is trapped in the room, never seeing another human being, food handed to him through a slot in the door, occasionally gassed so faceless men can enter and clean the room (and, on occasion, Dae-su himself).

Then, as suddenly as he is imprisoned, Dae-su is released, a pocketful of cash and no explanation as his only parting prizes. His desire to find those who imprisoned him and seek revenge is all that remains for Dae-Su. He has nothing else.

Yes, it’s essentially the same idea as Con Air: A wrongly imprisoned man loves his absent wife and daughter and wants nothing more to return to them. The difference: Con Air spells out everything. There is no mystery, no gray areas, no room for interpretation on the part of the viewer. There is no doubt that Poe is the triumphant hero and will return to his wife and child and that, in the end, everything will be OK.

Oldboy … nothing is spelled out. We don’t know who imprisoned Dae-su. We don’t know why. And it’s hard to imagine what would compel someone to take such drastic action, especially against such a waste-of-space meat puppet like Dae-su. He hardly seems worthy of the attention.

We also don’t know how Dae-su will react. He is fractured, no longer human in the way most of us are. Will he seek the people who are responsible for his imprisonment? Will he become the drunken loser he once was? Will he lose his mind, alone in the wide world for the first time in more than a decade? Here, the connection isn’t as simple. You must be able to identify with Dae-su’s sense of impotent rage and total confusion. Chan-wook Park is asking for a much deeper investment on the part of the viewer. Not all viewers are going to be able to make the commitment – some of that comes from the fact that incest becomes a key part of this puzzle – but those who do will be rewarded with a tale that is Biblical in its sense of honor and vengeance. It also contains the most shocking final scene I’ve ever scene, in the sense that Park manages to create a happy ending out of a horrific tale … or, at least, the happiest ending that could possibly come from this situation. I consider Oldboy to be the best film I’ve ever seen (suck it Citizen Kane, which will surely be an “Overrated Shit” topic somewhere down the road).

In the end, did my explanation help my young friend? I’d say yes. Because one of the most important ideas to come from our talk was that, as the writer, you control the world. You don’t have to give the viewer/reader any information you don’t want to until you want to. Con Air chooses to put that all out front because it’s appeal must be broad. Oldboy gives away nothing, slowly unfolding until the final piece of the mysterious puzzle is revealed. One is about an immediate, broad connection. The other is about commitment by the filmmakers and the viewer to a complex, rewarding story.